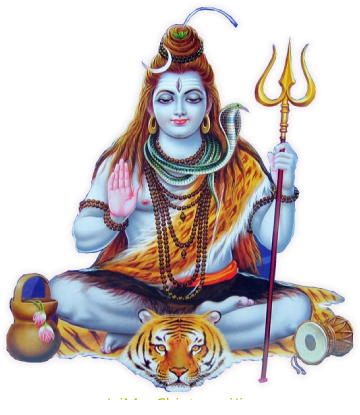 Shiva is one of the most worshiped gods in Hinduism. Everyone loves him, respects his great powers and can even identify with the Mahadeva- the greatest gods of all. Shiva is one part of the Trimurti Brahma- the creator, Vishnu the container and Shiva the destroyer. These three gods keep the circle of life going.

Destroying could be taken in a negative way. But often destruction or dissolution is very important, when we want to release unwanted baggage to make a change in our life.

But Shiva is not only a part of the Trinity, but also the Cosmic Consciousness himself, which unites with Shakti- the Cosmic Energy. Therefore Shiva is all: Creation, Preservation and Destruction.

When he is performing is Cosmic Dance as Natraj (you probably know the pose from your Yoga practice), which symbolizes the interplay of dynamic and static divine energy flow.

Shiva has so many different faces and therefore so many of his followers can identify with him, whether old or young. Hi are cool wearing dreads and smoking Marihuana, loves travelling to find the real truth, makes mistakes fearlessly and deals with them in a calm way and becomes sometimes very angry. He is easy to please and very unpredictable. But he is also householder, loving husband and true Yogi, meditating most of the time.

Generally he is sitting in the lotus pose meditating on his Mount Kailash, being covered with sacred ash. In his hair is the crescent moon, which symbolizes mystical vision and knowledge. The snake coiled around him, stand s for the Kundalini, which is in all of us. The holy and life giving river Ganga originates his head. Shiva has a third eye, the eye of wisdom and his trident represents the three Gunas (qualities of nature) Tamas, Rajas and Sattva. Moreover he is mostly depicted blue in colour- as he once was drinking all the poison out of the ocean. Shiva’s vehicle is Nandi, the bull, which represents power and ignorance. It is said that Shiva takes the ignorance of his devotes and gives them the power of wisdom.

So Yogi is known as the Adi Yoga- the first Yogi ever who first experienced the state of Samadhi. His first disciple was his wife Parvati, to whom he explained the secrets of Yoga, explained the 84 main Asanas and gave the powerful Guru Mantra Soham to her.

That time Matsiendra (do you remember Matsiendrasana, the seated Spinal twist?) , the Lord of the Fishes, was listening from a nearby river as well. He was so fascinated by Shiva’s talk about Yoga that he himself became Shiva’s disciple and a holy sage. In that way the chain of Guru and disciple started and the knowledge of Yoga was being shared till today’s time.