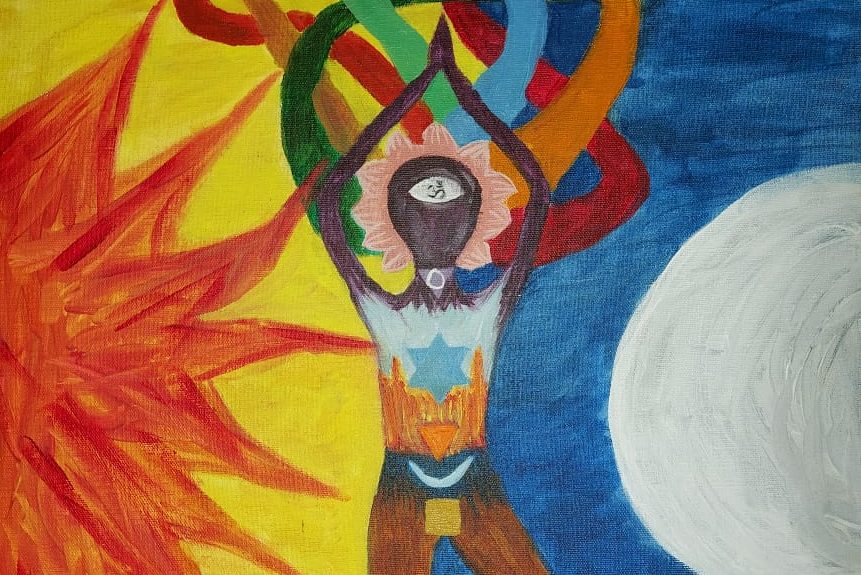 “Chakra” is Sankrit and means “wheel.” According to yogic anatomy, we have a total of 114 of these energy centers distributed throughout the body. Of these, Seven Chakras are particularly important. These are located along the spine, or as the yogi would say, along the shushumna, the main energy channel in our body.

In order to live a life in absolute harmony with oneself and the world, it is important that all chakras are energized and balanced to the right degree. This is because when a chakra is both too weak and too strong, an imbalance occurs that can express itself in the form of physical, energetic, emotional, mental and spiritual imbalances. Only when all the chakras are balanced can Kundalini (also known as Shakti), our etheric force, rise from the pelvic floor at the Root Chakra up to the Third Eye, where it connects with the cosmic consciousness Shiva and continues to rise beyond the Crown Chakra, creating holistic connection.

Each of the 7 main chakras has a specific yantra. This geometric shape is the figurative energetic expression of the chakra. In addition, each chakra has different numbers of lotus petals, with the number of petals increasing from the lowest to the fifth chakra (4, 6, 10, 12, 16). The 6th chakra at the Third Eye then has only 2 petals (Shiva and Shakti). The Crown Chakra, is called Sahasrara Chakra, because of its thousand petaled lotus flowers.
Each chakra has a Vedic mantra and a Bija mantra and also another Bija mantra in each of its petals. These sounds reflect the entire Sanskrit alphabet.

In addition, the lowest chakras are each assigned an element, each chakra also has a specific chakra animal and sense , as well as a specific color, which are represented either according to the Vedic colors or the rainbow colors.
When focusing on a chakra to activate and balance it, it is very effective to visualize the yantra, color and possibly the chakra animal while sounding the mantra. You can also visualize the element and sense , or the specific meaning of the chakra.

When the chakras are activated and balanced, they spin and whirl around their own axis, like small atoms, radiating out in all directions. While the three lower chakras are important for balance in the world, the three upper chakras serve as the connection to a higher consciousness. The heart chakra unites both aspects through the star of the two triangles.
One can incorporate chakra concentration very well into asana practice, pranayama practice and meditation. Especially in Kundalini Yoga the chakras play an important role.
Why don’t you do the free Seven Chakra Yoga class in which you balance and get to know all the chakras.
I have painted the seven chakras in the last few days, also a very nice meditative concentration practice: